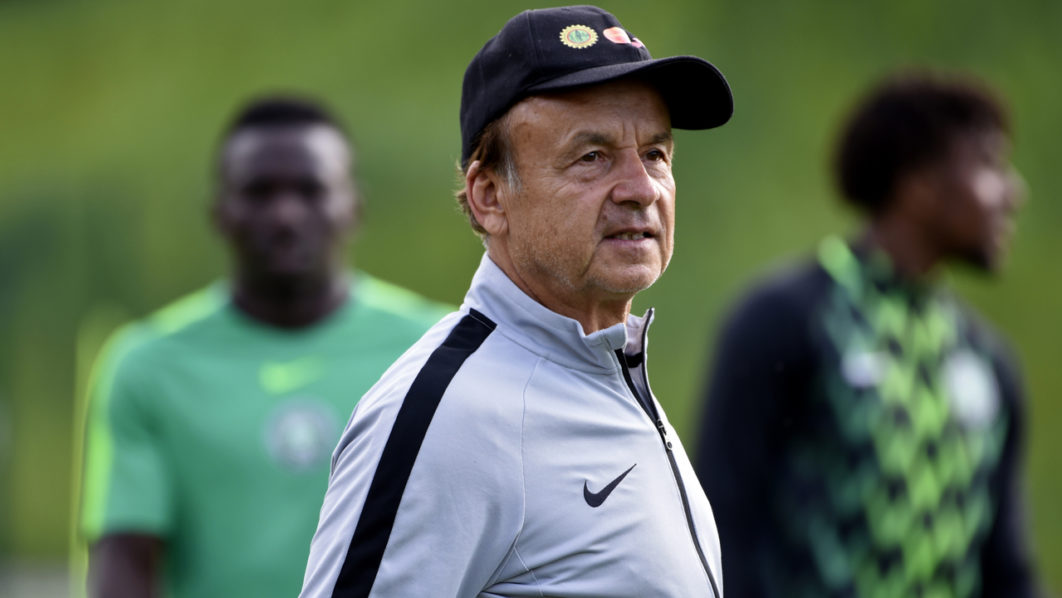 As the qualification for the 2022 FIFA World Cup gets under way next month, questions have be raised on the capability of the Super Eagles coach, Gernot Rohr to qualify Nigeria for the mundial and the inability of the Nigeria Football Federation to clear his five months outstanding debts.

Rohr, who will lead the team against the Lone Stars of Liberia on September 4 at the Teslim Balogun Stadium, Lagos, will be hoping to commence the campaign on a winning note.

However, there are concerns from some football pundits on how the German tactician will concentrate on the Super Eagles job without been distracted by the fact that he has not been motivated, financially.

Recall, it was recently rumoured that the Nigeria Football Federation (NFF) had cleared months of salaries it owed Gernot Rohr, and goalkeepers’ trainer; Alloy Agu, reports have it that they were paid ₦40M and ₦9M respectively.

Obviously, from the rumours making rounds, nothing was paid, but there are expectations from the manager to deliver and bring home the AFCON trophy/qualify Nigeria for the 2022 World Cup.

Pay rows have often surrounded Nigerian teams, with coaches not paid regularly, while players have boycotted training during important qualifiers or at major tournaments over unpaid bonus.

Although salaries and allowances of national coaches have been slashed, coach Gernot Rohr is being owed five months salary, with goalkeeper coach Alloy Agu awaiting 22-months unpaid wages while the Super Eagles are yet to receive their bonuses and allowances for 19 months.

The big question here is, how does the German survive in a country like Nigeria with unpaid salaries?

The NFF President, Amaju Pinnick said his administration is working to settle the debts they owe Super Eagles players and coaches despite the difficulties caused by the coronavirus pandemic.

“With the pandemic and challenges facing oil companies, things have been tough for our sponsors Aiteo, who are responsible for the payment of coaches. But we’ve moved to pay Alloy [Agu] nine months of his wages from what we have left and coach Gernot too will be sorted. We don’t want to owe and that is the mentality in which I came into the NFF.

“There are circumstances beyond our control. It is not a good thing to owe and we don’t like the image it creates. We are looking at every means not to owe. The toxic atmosphere has really affected our sponsorship drive but we can’t give excuses. We are working religiously and assiduously to resolve this as soon as possible.

“It’s a kind of government responsibility to pay the players and the [Nigerian] president is very keen on helping to sort it. I was in Abuja and I found out it’s only a matter of the modalities delaying paying the allowances and bonuses, any moment from now it will be sorted out.”

Meanwhile, the Chairman of the League Management Company LMC and the second Vice President of the Nigeria Football Federation NFF, Mallam Shehu Dikko has explained the reason behind the delay in paying Super Eagles Coach,Gernot Rohr, claiming sponsors have been left embarrassed by negative reports and interference from government agencies which he says is blighting the football authority.

“As we speak all our coaches have not received their salary on time. It’s only a short-term issue because our sponsors (Aiteo) that we sourced to pay the coach have always fulfilled their contractual obligations.

“Since 2017, when we signed this deal, there has not been any issue or delay, and sometimes he [Rohr] was paid upfront by this sponsor. Unfortunately, the sponsors are not happy about the negative happenings and it’s taken its toll on the NFF financial inflow. We had written to the coach to explain all these challenges leading to salary delays and he understands,” Dikko said.

However, Rohr has insisted that he’s not afraid of been fired by the Nigeria Football Federation (NFF) if he fails to qualify Nigeria for the 2022 World Cup.

“You can only stay in a country if the results are good, you have to go if it isn’t. Some coaches won’t but I agreed.”

Interestingly, Rohr has successfully qualified Nigeria for the 2022 Africa Cup of Nations slated for Cameroon and he will be battling to negotiate the World Cup qualifiers after been pitted alongside Liberia, Cape Verde and Central Africa Republic (CAR).

It is yet to be seen if the salary issue would have any direct effect on the performance of the Super Eagles. Only time will tell.

Just In: After 61 Days In Custody, DSS Finally Releases Eight Of Igboho’s Aides