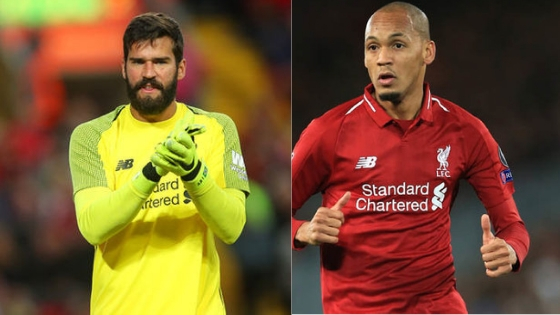 Liverpool pair Alisson and Fabinho will be back for tomorrow night’s clash with Chelsea.

The Reds finally returned to winning ways on the weekend with victory at Sheffield United but they still sit two points off top four and one adrift of Chelsea heading into Thursday’s clash following their horrible slump in form.

Alisson had missed Liverpool’s win at Bramall Lane following the tragic death of his father after he drowned in Brazil last week.

Meanwhile Brazilian midfielder Fabinho has missed almost a month of action after sustaining a muscle injury before the defeat to Leicester, with his last appearance for the Reds coming in the 4-1 humiliation at the hands of Manchester City.

But manager Jurgen Klopp has revealed the Brazilian No 1 and his counterpart will return to the Reds’ squad for the battle with Chelsea: “Ali trained now the full week and, yes, we should expect that he is able to return.

“Fab has now five or six sessions in his legs and we have to make a decision how we deal with that, but he looks good and is ready for the squad for sure.”