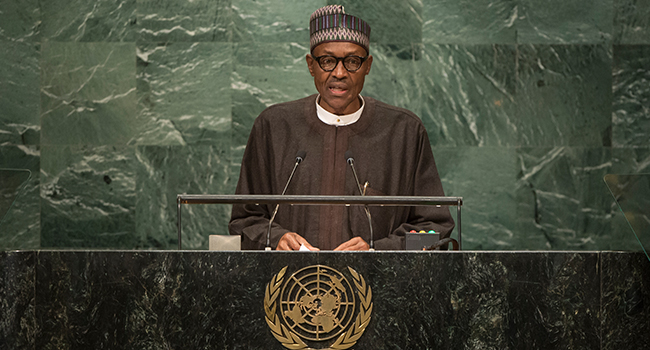 The President is speaking at the high-level General Debate of the summit ongoing at the UN Headquarters in New York, the United States.

He took to the podium to address the world leaders after President Nicos Anastasiades of Cyprus gave his speech.

The theme for this year’s UNGA is, ‘Building Resilience Through Hope – To Recover from COVID-19, Rebuild Sustainably, Respond to the Needs of the Planet, Respect the Rights of People and Revitalise the United Nations’.

President Buhari addresses the world leaders on the theme of the conference and other global issues.

Since his arrival in New York on Sunday, the President has attended a series of meetings with leaders of other countries’ delegations and heads of international development organisations.

The Nigerian leader met with Nigeria’s Ngozi Okonjo-Iweala who is the Director-General of the World Trade Organisation (WTO), as well as President Evariste Ndayishimiye of Burundi and Queen of The Netherlands, Maxima Zorreguieta.

He also attended the UN Food Systems Summit and participated in a hybrid High-Level event tagged “Transformative Actions for Nature and People,” among others.

President Buhari, who is expected back in the country on Sunday, was accompanied to New York by the Minister of Foreign Affairs, Geoffrey Onyeama; Attorney-General and Minister of Justice, Abubakar Malami; and Minister of State for Environment, Sharon Ikeazor.

Also in his delegation were the National Security Adviser, Retired Major General Babagana Monguno; and the Director-General of the National Intelligence Agency (NIA), Ambassador Ahmed Abubakar, among others.

Related Topics:BuhariUN General Assembly
Up Next

Ooni Of Ife Goes Down Memory Lane, Recounts How He Became A Father At 19 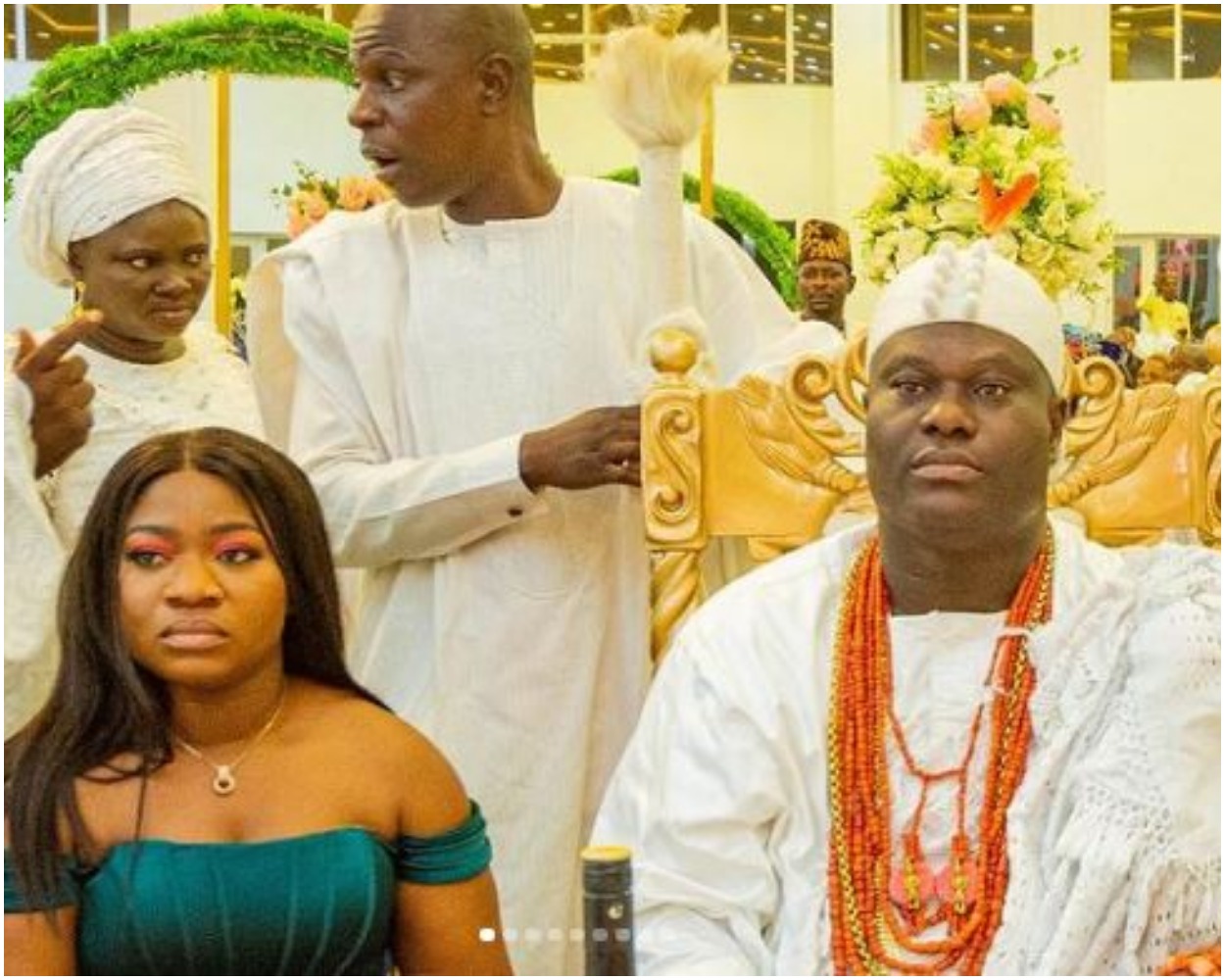 The Ooni of Ife, Adeyeye Enitan Ogunwusi has taken a trip down memory lane whilst celebrating his daughter he had when he was just 19 years.

Sharing a photo with his daughter, Princess Adeola Ogunwusi, via Instagram, the Ooni penned emotional words to celebrate his day.

He further explained how daunting the journey of being a young father was, revealing it was such a huge responsibility for him. He noted that the experience taught him a lot.

He wrote; ”Parenting can be a big dream with unique challenges. It’s never a game of squid. I have had my share of its beauty as a young Father who was blessed with the most precious daughter at the age of 19. It was a huge responsibility for me, I relied on a leap of faith and determination. The Journey with my daughter, Princess Adeola was incredibly filled with uncertainty as a young Father, nonetheless, I guided my heart with all diligence and girded my loins for all the challenges.

“Reminiscent of the past, those steps of moulding and shaping the future of another life were huge tasks and calculated risks. Based on my recollection, I lived through pockets of circumstances that called my integrity and competence to questioning. I equally realised that being a single parent to a daughter in an unfamiliar footprint can be a major shift in human experience and a daunting journey as you need to help your child to navigate day to day social situations, complex feelings, and developmental changes that life prescribes.

“Profoundly, life taught me to exhibit an abundance measure of resilience, compassion, determination, and above all empathy which my daughter sought from me. We formed an unbroken bond, shared in our joy and challenges as my closest friend and great confidant. She is and will always be a huge blessing to me and life’s successes. I celebrate you, Princess Adeola Ogunwusi for being the epitome of my strength and dignity. Your tenacity, doggedness, and unshakable optimism to be the best in life are unarguably lifelong lessons that I cherish in you.”

Nnamdi Kanu’s Lawyers To FG: We Are Prepared For Fireworks 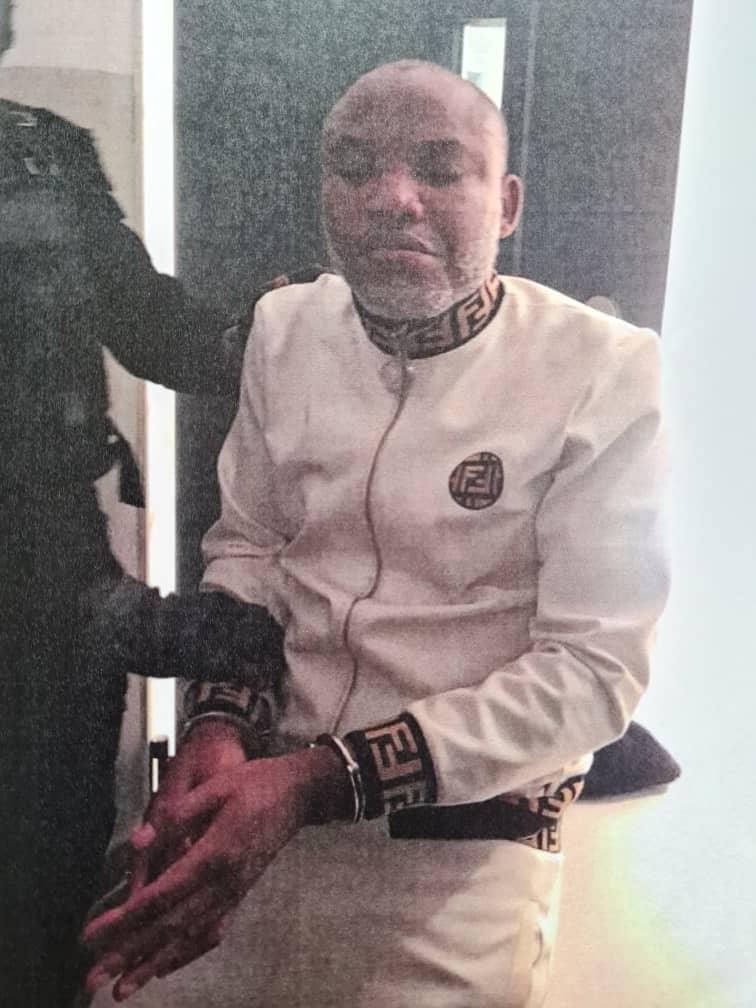 Ifeanyi Ejiofor, lead counsel to the embattled leader of the Indigenous People of Biafra, Nnamdi Kanu, has asked the Federal Government and others to expect “legal fireworks” on Thursday.

He also said the IPOB legal team is “eminently prepared”.

He said this while reacting to the amended charges by the Federal Government against his client.

In an update posted on his Facebook page, Ejiofor also said his client is in high spirit ahead of the arraignment.

Ahead of his arraignment on October 21, the detained leader of tIPOB had asked millions of his supporters to embark on a dry fast.

Recall that the Federal Government filed an amended seven counts against Nnamdi Kanu, according to one of his lawyers, Maxwell Opara.

Opara stated this in a short interview with journalists on the premises of the Federal High Court in Abuja when he accompanied Senator Ifeanyi Uba to file a motion on notice, seeking an order granting him leave to visit Kanu in the custody of the Department of State Services.

“The Federal Government has filed an amended seven counts against Kanu”, he said with no details.

Reacting to the development, Kanu’s lead counsel Ejiofor said, “I and my colleague, Alloy Ejimakor, had a very fruitful visitation to Onyendu Mazi Nnamdi Kanu. We discussed a wide range of matters, especially concerning Hearing in his case and appearance in court on 21st October, 2021. There will be more on this later.

“The coast is now clear for legal fireworks this Thursday, particularly now that we have been served with a purported “Amended Charge” in the Case. We are eminently prepared for Thursday’s outing, and you won’t be disappointed.

“Onyendu Mazi Nnamdi Kanu is in good spirit, awaiting his auspicious outing on Thursday, the 21st Day of October, 2021. He commended those who are in the spirit with him while declaring that Chukwuokike Abiama has ordained this special Day for a victorious outing.

“He requested that the fasting, supplications, and prayers should continue, as he noted that they are strongly impacting positively.

“He further implored UmuChineke to be steadfast, and keep their eyes steadily on the ball and pray without ceasing, while believing very strongly that this present situation will pass too and it shall end in Praises.

“This THURSDAY is the D-Day, and your solidarity/support must be demonstrated within the confines of the law, as you have always shown.

“Onyendu specifically asked us to extend his undiluted love and confidence for Umuchineke.”