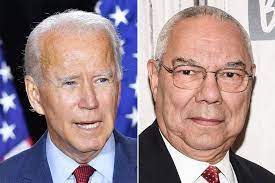 President Biden and first lady Jill Biden on Monday mourned the death of their “dear friend” Gen. Colin Powell, calling him a “patriot of unmatched honor and dignity.”

Powell died Monday at 84 from complications related to COVID-19, his family announced. He was fully vaccinated.

Biden remembered Powell in a statement Monday, saying he “worked closely” with him while he was in the Senate, and while Powell served as national security adviser, chairman of the Joint Chiefs of Staff, and as secretary of state.

“Over our many years working together – even in disagreement – Colin was always someone who gave you his best and treated you with respect,” Biden said, adding that Powell “embodied the highest ideals of both warrior and diplomat.”

“He was committed to our nation’s strength and security above all,” the president said, adding that his military experience gave him the perspective “better than anyone that military might alone was not enough to maintain our peace and prosperity.”

“From his front-seat view of history, advising presidents and shaping our nation’s policies, Colin led with his personal commitment to the democratic values that make our country strong,” Biden continued. “Time and again, he put country before self, before party, before all else – in uniform and out – and it earned him the universal respect of the American people.”

Powell was the first Black secretary of state and chairman of the Joint Chiefs of Staff.

Biden said he “repeatedly” broke “racial barriers” and blazed “a trail for others to follow in Federal Government service.”

“Colin was committed throughout his life to investing in the next generation of leadership,” Biden said. “Whether through his care for the women and men serving under his command and the diplomats he led, or through the work he shared with his wife Alma at the America’s Promise Alliance to lift up young people, or through his years leading the Eisenhower Fellowships, Colin’s leadership always included a focus on future.”

In the same vein, former President Obama called Colin Powell an “exemplary soldier and an exemplary patriot” in a statement honoring the former general following his death from COVID-19 complications on Monday.

“Years ago, when he was asked to reflect on his own life, General Colin Powell described himself as ‘first and foremost a problem-solver,'” Obama said. “It was true, of course. But he was far more than that.”

“Powell helped shape American policy for decades, he added. “And although he’d be the first to acknowledge that he didn’t get every call right, his actions reflected what he believed was best for America and the people he served.”

“He never denied the role that race played in his own life and in our society more broadly,” Obama noted. “But he also refused to accept that race would limit his dreams, and through his steady and principled leadership, helped pave the way for so many who would follow.”

Also, former president George W. Bush, who Powell served as secretary of state under, expressed his sadness at the sudden loss of Powell, along with a statement on Powell’s longtime service to the nation.

“Laura and I are deeply saddened by the death of Colin Powell. He was a great public servant, starting with his time as a soldier during Vietnam.” – President George W. Bush

Terrorists Who Launched Coup Against Me Are In Nigeria, Turkish President Warns Buhari 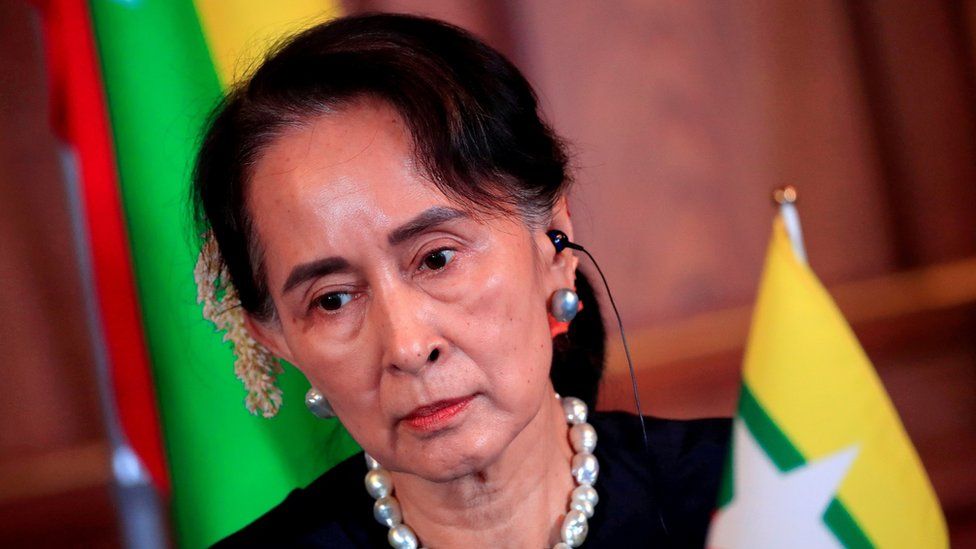 A court in Myanmar on Monday sentenced the country’s deposed leader, Aung San Suu Kyi, to four years in jail, according to the AFP.

A spokesman for Myanmar’s military told the AFP news agency that the woman was found guilty of incitement and of violating COVID-19 rules.

Zaw Min Tun said she received two years in prison on each of the two charges.

Former President, Win Myint, was also jailed for four years under the same charges, he said, adding that the pair will not be taken to prison yet.

“They will face other charges from the places where they are staying now” in the capital Naypyidaw, he said, without giving further details.

Reuters and the Associated Press, citing sources familiar with the proceedings, also said Suu Kyi and Myint were sentenced to four years in prison each.

The trial in Naypyidaw has been closed to the media, while the military has barred Suu Kyi’s lawyers from communicating with the media and the public.

The ruling on Monday is the first in a dozen cases the military has brought against the 76-year-old since it deposed her civilian government in a coup on February 1.

Other cases against the Nobel Peace Prize laureate include multiple charges of corruption, violations of a state secrets act, and a telecoms law that altogether carry a maximum sentence of more than a century in prison, Al Jazeera reports.

Suu Kyi, who had spent 15 years in house arrest under a previous military government, denies all the charges. Chris Cuomo had been suspended from CNN over the matter just days before his termination.

“We retained a respected law firm to conduct the review, and have terminated him, effective immediately,” a statement posted to CNN‘s official communications Twitter account said.

“While in the process of that review, additional information has come to light.”

The termination comes after documents surfaced showing that Cuomo, who anchored the 9:00 pm news slot, offered advice to his politician brother that was deemed too close for comfort by his employer.

“The documents, which we were not privy to before their public release, raise serious questions,” a CNN spokesperson said Tuesday, adding they “point to a greater level of involvement in his brother’s efforts than we previously knew.”

CNN on Saturday found itself in the awkward position of reporting on the firing of one of its own anchors.

“This is not how I want my time at CNN to end but I have already told you why and how I helped my brother,” Cuomo, 51, said in a text message statement read out on the air by CNN media reporter Brian Stelter.

“So let me now say as disappointing as this is, I could not be more proud of the team at ‘Cuomo Prime Time,’” Cuomo added. “I owe them all and will miss that group of special people who did really important work.”

Cuomo has spoken candidly of his strong bond with his older sibling.

“He’s my brother, and I love him to death no matter what.”

In October, the former governor — whose father Mario Cuomo had also been governor of New York — was charged with a misdemeanor sex crime for forcible touching.

At the start of the pandemic, the Cuomo brothers soared to new heights of popularity: Andrew, 63, earned praise for his frank daily briefings as the coronavirus ravaged New York, and his live exchanges with Chris on CNN were peppered with banter.

The World Health Organisation (WHO) says the severity of the Omicron variant of COVID-19 is yet to be determined as scientists are still studying it. It, thus, urged nation’s not to shut their borders on travellers in panic.

WHO spokesperson Christian Lindmeier on Friday in Geneva stressed that data suggesting that Omicron was highly transmissible was only preliminary.

The UN health agency repeated that it would take another two weeks before more is known about how transmissible and how dangerous it actually is.

He also repeated WHO advice against blanket travel bans, except for countries whose health systems were unable to withstand a surge in infections.

“It is much more preferred to prepare your country, your health system for possible incoming cases because we can be pretty sure that this Omicron variant will spread around,” he said.

The Delta mutation – declared a variant of concern this summer – is now “predominant”, Mr Lindmeier added, “with over 90 per cent all around the world.

“This is how this virus behaves and we will most likely not be able to keep it out of individual countries.”

The WHO official also cautioned against knee-jerk reactions to reports that Omicron had continued to spread.

“Let’s not get deterred right now, let us first get as much information as possible to make the correct risk assessment based on the information that we will have and then let’s move on.

“Let’s not get completely worried or confused by individual information which are all individually important, but which need to be brought together in order to assess together,” he said.

The development comes as WHO said that it was sending a technical surge team to South Africa’s Gauteng province to monitor Omicron and help with contact tracing, amid a spike in coronavirus reinfections.

For the seven days leading to November 30, South Africa reported a 311 per cent increase in new cases, compared with the previous seven days, WHO said on Thursday.

Cases in Gauteng province, where Johannesburg is located, have increased by 375 per cent week on week.

Dr Salam Gueye, WHO Regional Emergency Director for Africa, noted that just 102 million Africans in Africa – 7.5 per cent of the continental population are now fully vaccinated.

He said that more than 80 per cent of the population had not received even a single dose, noting that this is a dangerously wide gap.