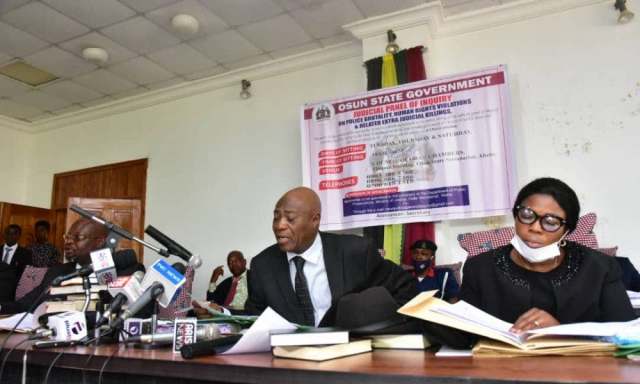 The Assistant Commissioner of Police, Osun Command and two officers of defunct Special Anti-Robbery Squad identified as Odua and Aare have been summoned to appear before the Panel of Inquiry investigating police brutality and extra-judicial killing.

The Nation recalls Mr Ayinla Rasheed, father of a ram merchant testified before the Panel that his son, Ismaila Rasheed, was gruesomely killed inside his hotel room and robbed of millions.

The Manager of Ile Labo Guest House, Iwo, Mr Afeez Adio, corroborating the testimony of the father of the deceased, indicted two officers of defunct SARS named Aare and Odua.

He noted one of the two officers, Oodua, admitted that he shot his guest, Ismaila dead before Assistant Commissioner of Police at Osogbo Command.

Counsel for the petitioner, Barrister Tunde Ajani informed the panel he has not received any response from the Police counsel, F. B Osie since all witnesses gave evidence and indicted some officers with the Assistant Commissioner of Police. “It seems the Police counsel is covering those two officers from appearing before the panel.

“The manager of the hotel while giving evidence before the panel said one of the officers admitted that he killed Ismaila before Assistant Commissioner of Police, Osun Command. “Even, the father of the deceased made it known to the panel that the ACP called him and the wife of the deceased to give them money.” The police counsel, Osie told the panel that he is not supporting brutality or covering the officers that were indicted.

He said, “I have been busy in my office lately, I promise that I will be diligent and ensure that I provide all that is necessary to the panel”. The Chairman of the Panel, Justice Akin Oladimeji ordered the officers indicted in the petition and while taking evidence from parties involved.

Inauguration: Biden To Sign Executive Orders On Day One Amid High Alert