A Malaysian court sentenced former prime minister Najib Razak to serve up to 12 years in prison on Tuesday after finding him guilty of crimes involving the multibillion-dollar looting of the 1MDB state investment fund that brought down his government in a shocking election ouster two years ago.

Najib was calm and stone-faced as he became the first Malaysian leader convicted. He has vowed to appeal the verdict and took an oath, in brief remarks from the dock before the sentencing, that he was unaware of the graft.

Judge Mohamad Nazlan Ghazali sentenced Najib to 12 years in jail on one count of abuse of power, 10 years each for three counts of criminal breach of trust, and 10 years each for three counts of money laundering, as well as a fine of 210 million ringgit ($49.4 million). But he ordered the sentences to run concurrently, meaning that Najib will face up to 12 years in jail.

The judge said the sentence was “appropriate and proportionate” taking into account that Najib had committed the crime from a “position of trust” as prime minister, his final plea and the need to deter others from committing the same crime.

The ruling in the first of his five corruption trials came five months after Najib’s Malay party returned to government as the biggest bloc in an alliance that took power from the reformist government that ousted Najib in 2018.

Analysts said the ruling would bolster the prosecution’s case in Najib’s other trials and would signal to the business community that Malaysia’s legal system has strength in tackling international financial crimes.

“I find the accused guilty and convict the accused of all seven charges,” Judge Mohamad Nazlan Ghazali said after spending two hours reading out an elaborate ruling. Some of Najib’s supporters waiting outside the courthouse cried when they learned of the verdict.

Najib, 67, has said he was misled by rogue bankers and the case against him is political.

“I want justice. I want to clear my name,” he wrote on Facebook late Monday. “After this, we will go to the Court of Appeal. I am ready.” A scion of one of Malaysia’s most prominent political families, he faces 42 charges in five separate trials and could face years in prison.

The judge agreed with prosecutors that Najib had “overarching control” of SRC, failed to rebut the allegations against him and that prosecutors had established beyond reasonable doubt that Najib misappropriated money for his own use.

“The conviction would serve as a solid foundation for the prosecution in ensuing IMDB-related trials,” said Oh Ei Sun, a senior fellow with Singapore’s Institute of International Affairs.

He said the ruling also would strengthen the credibility of Prime Minister Muhyiddin Yassin, even though he now relies on Najib’s party for support. Muhyiddin was fired as Najib’s deputy five years ago to the date of Tuesday’s verdict for speaking out on the 1MDB scandal. US President Joe Biden on Thursday used the backdrop of the Martin Luther King Jr. memorial to charge Republicans with following Donald Trump into a “deep black hole” of white supremacy and voter suppression.

The searing speech at a ceremony marking the 10th anniversary of the memorial to the slain African-American civil rights hero on Washington’s National Mall was unusual for Biden’s direct attacks on Trump.

Biden said Republican state representatives, ranging from governors to officials in charge of overseeing elections, have launched “an unrelenting assault” on access to free elections ahead of next year’s midterm legislative poll and the 2024 presidential vote.

What Biden called an “un-American” campaign is defended by Republicans as an attempt to tighten security around elections.

But the Republican push comes as Trump continues to press his unprecedented bid to discredit Biden’s win in the 2020 election, which he claims, with no evidence, that he won.

Democrat Biden has often called out Trump’s incendiary lies about the election — which polls show that many ordinary Republicans believe are true. However, Biden more rarely refers to Trump directly, preferring to ignore the Republican.

In his speech, Biden said the white supremacy that King fought before being assassinated in 1968 had never fully gone away.

Biden described the January 6 assault by a pro-Trump mob on the US Capitol building while lawmakers were inside certifying the 2020 election results as another outbreak of the same problem.

“The violent, deadly insurrection on the Capitol nine months ago was about white supremacy in my view,” he said.

“The bad news: we had a president who appealed to the prejudice. The good news is that it ripped the Band-Aid off, made it absolutely clear what’s at stake,” Biden added.

He was speaking the day after Republicans in the Senate blocked a debate on Democratic legislation to reform what Biden’s party says is a morass of unfair election laws, including campaign finance, voting rules and redistricting. 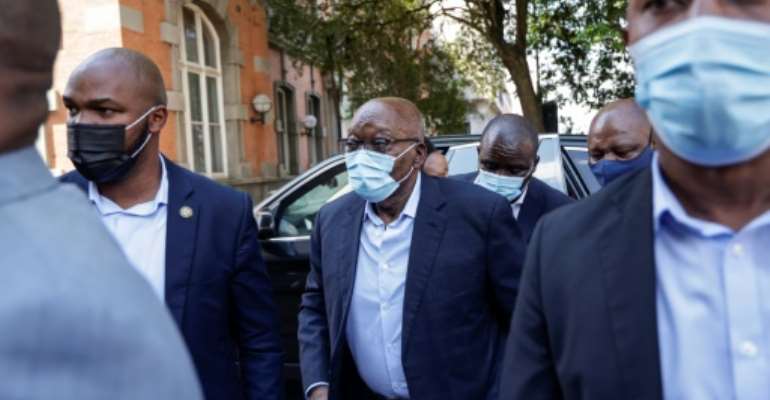 South Africa’s ex-president Jacob Zuma on Thursday made his first public appearance since his release from prison on medical parole last month to lay charges against a chief state prosecutor.

Zuma walked into a police station in the eastern city of Pietermaritzburg, where he is on trial for corruption, to open a criminal case against advocating Billy Downer for allegedly leaking his medical records.

Zuma stepped briskly out of his vehicle and up to the building’s entrance surrounded by security personnel, according to AFP reporters at the scene.

He was accompanied by one of his daughters and waved to people queueing outside the building as he walked past.

A small crowd of supporters gathered on the street, singing and dancing in Zuma-print t-shirts.

Aged 79, Zuma was released from prison due to ill health two months into a 15-month jail sentence for refusing to collaborate with a graft probe into his 2009-18 presidency.

He was hospitalised from prison and underwent surgery for an undisclosed ailment.

Critics accuse the ex-leader of using ill health as an excuse to further delay a drawn-out corruption trial relating to a 1999 purchase of arms from five European firms.

Deputy president at the time, Zuma is accused of pocketing bribes from French defence giant Thales and faces 16 charges of fraud, graft and racketeering.

The trial kicked off this year after decades of postponements and delays.

Zuma wants Downer to recuse himself for allegedly sharing confidential medical information to the media.

The next hearing is set for October 26.

In July, Zuma was found guilty of contempt of court for snubbing a separate inquiry into mass looting of public funds during his rule.

His jailing sparked violent protests and looting in his home province of KwaZulu-Natal that spread to the financial hub Johannesburg in July, claiming over 350 lives.

Terrorists Who Launched Coup Against Me Are In Nigeria, Turkish President Warns Buhari

Turkish President, Recep Tayyip Erdogan, on Wednesday, revealed that members of a terrorist organization, called FETO, which attempted to push him out of power in 2016, via a failed coup, are currently in Nigeria.

President Erdogan, who is on a four-day official visit to Nigeria, made the revelation on Wednesday at a joint press conference with President Muhammadu Buhari.

During his speech, President Erdogan solicited corporation from Nigeria as his country battle terrorism, stressing tyatbhis country has been battling with terrorism for many years.

He said: “Distinguished members of the press, as Turkey, we have been closely monitoring the developments unfolding in Nigeria, our brotherly and friendly nation.

“So, in order to cooperate further in the fields of military, defense, and security, we are doing everything that will be available

“The perpetrator of the heinous failed coup of July the 15th, FETO, is still illegally active in Nigeria, and we are continuously sharing our intelligence with the Nigerian interlocutors and authorities.

“I hope and pray that our Nigerian brothers will forge a closer solidarity in this field with us, the Republic of Turkey.

The Turkish President expressed hope that their visit to Nigeria would yield “the most auspicious results and I would like to thank my distinguished brother, President Buhari, for being such a gracious host for me and for my delegation.”