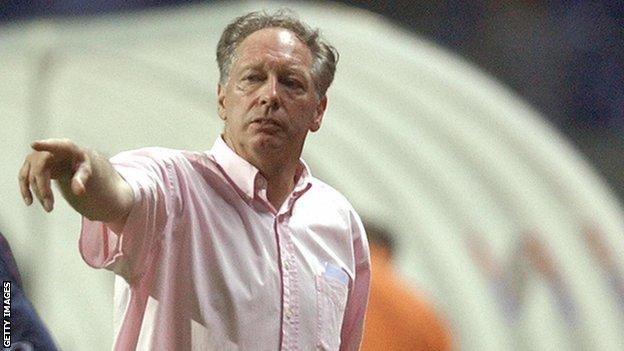 The continuous search for a possible replacement of Super Eagles coach, Gernot Rohr if he’s eventually sacked by the Nigeria Football Federation (NFF) have seen some coaches in Europe, including Jo Bonfrere put in his application for the managerial job.
Recall that last week, it was confirmed by the Eagles’ former media officer, Colin Udoh that the Dutch tactician has formally submitted his application.
Udoh also claimed current handler, Gernot Rohr, is close to being fired by the NFF. Recall that the NFF are in the process of disengaging the German tactician as Eagles coach after complaints about his performance in the 2022 World Cup qualifying run, where the team struggled to seal qualification for the final play-off.
Since taking over the helm of affairs in 2016, former German International defender Rohr has overseen 55 matches with the Super Eagles winning 29, losing 14, and drawing 12 matches. He led the Super Eagles to a first round exit at the 2018 FIFA World Cup (Russia) and a third place finish at the 2019 AFCON (Egypt).
There is no doubt that Bonfrere is familiar with the Super Eagles, having served as the team’s coach on two occasions and as an assistant in another stint.
He served as Super Eagles assistant coach under Clemence Westerhof at the 1994 World Cup before leading the Dream Team to the gold medal in the football event of the Atlanta 1996 Olympics.
He left his role after the Olympics but returned in 1999 to lead Nigeria to a second-place finish at the 2000 Africa Cup of Nations after losing the final game to Cameroon via penalty shootout.
However, the Dutch tactician insisted he is ‘the right man’ to redeem the fortunes of the national team. He said he would restore the Super Eagles’ ‘free-flowing style’ of football that attracted world attention and adulation.
Bonfrere blasted the current Eagles coach for his ‘poor tactical decisions‘ that have severely limited team performances, despite boasting an array of young, technically gifted players.
“When I was the coach of the Nigeria Super Eagles, the organization, structure and pattern of the super eagles brought Nigeria national team to be 5th/6th in the worlds ranking. But the Nigeria super eagles of today lack pattern, organization and a structure. I follow all the players of the super eagles’ home and abroad. I know their abilities and how they all play in their various football clubs,” Bonfrere wrote.
“The problem the Super Eagles is facing today is lack of ideas from the coach. The history of the coach matters and the coach keep using failed patterns just like in Russia, Africa nation cup matches. I have watched coach Rohr in different matches and there is no single pattern he uses. No effective formation and the players don’t understand themselves, The players can’t hold the ball to themselves for up to 3secs. I’m not trying to castigate my colleague but his knowledge needs to be upgraded to the new modern football. At this Era the Nigeria super eagles has to have a PATTERN. When I coach it is guaranteed my players score a goal and more in respect to the kind o formation and pattern I use.”
Meanwhile, former Nigerian goalkeeper, Jonathan Akpoborie in a chat with Thepledge, kicked against the decision of the NFF to want to consider the appointment of Bonfrere as possible replacement for Rohr.
“It will be a disgrace to our football if the NFF decide to hire Bonfrere as Rohr’s replacement. How on earth can you convince me that Bonfrere is a good job for our football today.
“They are taking our football backward with their decision to even accept Bonfrere’s application. They have to be very careful.”
However, former, Nigerian goalkeeper, Andrew Aikhoumogbe in an interview with Thepledge from his Cairo base in Egypt, stated that NFF have the right to accept Bonfrere’s application for the Super Eagles job.
He noted that if Bonfrere has what it takes to manage the team then there is nothing wrong.
I really don’t see anything wrong if the NFF decide to accept the application of Jo Bonfrere for the managerial role of the Super Eagles. If he’s good enough for the job then it is left for the NFF to decide his fate. Like you know, he’s not the only one vying for the position.”
In the same vein, former Enyimba coach, Samson Unuanel has insisted that the NFF must distance themselves from signing Bonfrere due to his lack of tactical and technical know-how.
Unuanel stated that the NFF should focus on a new set of coaches that can add value to the growth of the Super Eagles.
“To be candid, it is a slap on our football that Bonfrere has tendered his application to coach the Super Eagles. Yes, he won the Atlanta Olympic gold for Nigeria in 1996 but football has moved on since then.
“If the Super Eagles must make a big difference in Africa and World Cup, then the NFF must get serious by thinking of a sound coach that will add value to the growth of our football.”
By and large, it is yet to be seen if the NFF will finally settle for Bonfrere as the Super Eagles with the AFCON just weeks to go. Only time will tell.

Related Topics:Bonfrere Jo
Up Next

Funds Were Withheld For Duplicated Projects In 2021 Budget, Says Akabueze

I’m Not Desperate To Become A Manager, Says Carrick