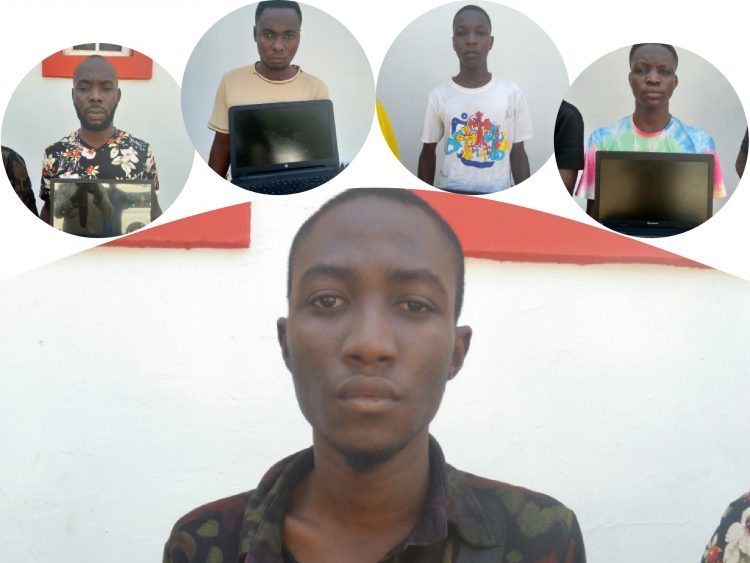 They were convicted on separate charges before Justice Muhammad Muhammad of the Sokoto State High Court, Sokoto.

They were prosecuted on a one count charge each bordering on conspiracy and cheating.

The charge against one of the defendants reads, “that you Alfred Stephen, sometime in 2021 at Sokoto, within the Judicial Division of the High Court of Justice of Sokoto State did fraudulently cheated one Grazyna, a Belgium national; Alfansina, an Italian and Janny, a Dutch woman by dishonestly deceiving them to collect the total sum of €19,500 Euros (Nineteen Thousand Five Hundred Euros) by presenting yourself to them as an American serving in Syria and sending documents of false pretenses to them which you knew to be false and thereby committed an offence of cheating contrary to Section 310 of the Sokoto State Penal Code Law 2019 and punishable under Section 311 of the same Law”.

Upon arraignment, they pleaded ‘guilty’ to the separate charges.

In view of the defendants’ plea, the prosecuting counsel, S. H. Sa’ad who appeared with Musa Mela Gwani and Habila Jonathan asked the court to convict and sentence the defendants.

However, the defence counsel, Shamsu Dauda, pleaded with the court to temper justice with mercy as his clients were first time offenders who have become remorseful. He also told the court that the convicts are ready to restitute their victims.

He ordered the convict to restitute the sum €19,500 to the victim through EFCC.

The 2nd defendant, Onyebuchi Joseph Elijah (a.k.a Mr. Svenulrich) was setenced to five years imprisonment with an option of N150,000.00 fine. The convict is also to restitute the victim the sum of €1,750.00.

The 3rd defendant, Usman Mustapha was sentenced to five (5) years imprisonment with an option of N150,000.00 fine.

He is to restitute the sum Five Thousand Denmark Krone which is equivalent to Three Hundred and Ten Thousand Naira only (N310,000) to the victim.

The 4th and 5th defendants, Abdullahi Abubakar (a.k.a Shine Eye) and Umar Khalifa were convicted and sentenced to three years imprisonment each with an option of N100, 000.00 fine

Operatives of National Drug Law Enforcement (NDLEA) have seized 4.1 kilograms of cocaine wrapped in tea bags as well as arrested four traffickers at the Lagos and Abuja airports.

The spokesman of the agency, Femi Babafemi, said this in a statement issued on Sunday, explaining that the cocaine was intercepted from a Brazil-based cartel.

“At least, four traffickers involved in the attempts to import and export illicit drugs through the country in the last week are now in the custody of the agency,” the statement read.

“One of them is 33-year-old Pascal Ekene Okolo, an indigene of Ihe in Ogwu Local Government Area of Enugu State, who was arrested during an inward clearance of Qatar Airways flight from Sao Paulo via Doha at the arrival hall of the NAIA on Sunday 17th April.

“Okolo, who claimed to be into wine business in Brazil, was arrested with a travelling bag containing different medicinal tea bags, which were used to conceal 4.1 kilograms of cocaine.”

According to the anti-drug agency, a Canada-based Nigerian, Anigo Christian Godspower, was intercepted at the D-Arrival Hall of the MMIA during an inward clearance of passengers on Qatar Airways from Sao Paolo via Doha to Lagos. This happened last Sunday.

Two blocks of cocaine weighing 2.10kg were discovered when his luggage was searched. But the suspect, 52, and a native of Udi local council area of Enugu State, claimed he ran an unregistered Bureau De Change business before taking up the illicit drug trade.

“The bid by another cartel to export 950 grams of Heroin concealed in the soles of lady’s footwear through the MMIA cargo shed was equally foiled by anti-narcotic officers who have so far arrested two suspects linked to the crime,” it added.

“Those arrested between 16th and 17th April in connection with an attempt to export the drug to Monrovia, Liberia include Idokoja Solomon Chukwurah and Patrick John Tochukwu.”

This is just as a suspected fake security agent was arrested on Saturday 23rd April in Abuja while moving 23.8kg of cannabis from Lagos to Maiduguri, Borno State.

In his reaction to the feats, the Chairman/Chief Executive of NDLEA, Brig. Gen. Mohamed Buba Marwa also commended the operatives of the affected commands.

Abiodun was docked before Justice Oluwatoyin Taiwo of the Special Offences Court in Ikeja, the capital of Lagos.


Abiodun, who posed as a General in the Nigerian Army, allegedly made false representations to the complainant, Kodef Clearing Resources.

The defendant claimed that President Muhammadu Buhari shortlisted him and one other as nominees for Chief of Army Staff (COAS) position and that he needed a grant to “press and process the appointment”.

Abiodun, arrested at his house in the Alagbado area of Lagos, on Wednesday January 12, 2022, allegedly forged a letter of appointment purportedly signed by the President.

The defendant is alleged to have, in May 2020, forged a Nigeria Army ID card with serial number 387140, claiming it was issued by the Army.


Abiodun also “forged a Letter of Recommendation” purportedly signed by ex-President Olusegun Obasanjo listing one Adebayo Rasaq Adebola, with recruitment No 77RRI/OG/556/0032555 and Adeogun Emmanuel Adesola with No 77RRI/OG/352/0123751 for employment into the Army.

At the time of arrest, six pump action guns, three cartridge bullets, a swagger stick and several doctored documents were found in his possession.

Abiodun pleaded “not guilty” to the charges when read to him.

Prosecuting counsel, A.O. Muhammed, prayed the court for a trial date and for the remand of the defendant at a Nigerian Correctional Service (NCoS) facility.

The defence counsel, Kayode Lawal informed the court of a summons for bail filed on behalf of Abiodun.

Justice Taiwo adjourned till Thursday April 14, 2022 and ordered that the defendant be remanded at the Ikoyi prison.

A 43-year-old Kehinde Oladimeji and his wife, Adejumoke Raji (35 years) have been arrested by the Ogun State police command for being in possession of fresh human parts in Abeokuta.

The couple, who are residents of 72, MKO Abiola way Leme Abeokuta, were arrested on Saturday after a report was lodged at Kemta Police station.

The Baale of Leme community, Chief Moshood Ogunwolu, had reported to the police that one Pastor Adisa Olanrewaju, who is a co-tenant with the couple, informed him of offensive odour oozing out of his neighbour’s room.

Acting on the complaint, the DPO of Kemta division, CSP Adeniyi Adekunle, was said to have led his detectives to the scene.

On searching the room, a plastic bowl containing fresh different parts of human being was discovered in the room, and the couple were promptly arrested, the Ogun State police image maker, Abimbola Oyeyemi, said on Saturday.

“On interrogation, the suspects confessed they were herbalists and that the human parts comprising of hands, breasts and other parts were given to them by one Michael who they claimed resided in Adatan area of Abeokuta. All efforts to locate the said Michael proved abortive as the suspects could not locate his house,” Oyeyemi stated.

He explained that a dismembered body of an unknown person was discovered last week around Leme area of Abeokuta.

However, Oyeyemi explained that it could not confirm yet whether or not the parts is that of the found body.

Meanwhile, the Commissioner of Police, Lanre Bankole, has ordered the immediate transfer of the suspects to the homicide section, vowing that anyone who is directly or indirectly involved in the crime would be brought to book.

Recently, three teenagers were arrested for beheading and burning the head of a girl for money ritual.