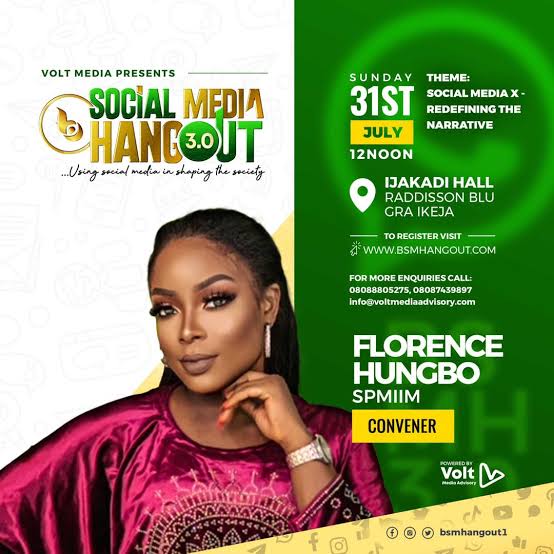 A long list of entertainers led by Gbenga Adeyinka 1st, Denrele Edun, and Iyabo Ojo are billed to be part of the 2022 edition of Volt Media Advisory’s Bodex Social Media Hangout.

Volt Media Advisory, the organisers of the media hangout, recently announced that plans are already in top gear for the third edition at Radisson Blu Hotel in Ikeja, Lagos on July 31, 2022.

According to the convener of the Bodex Social Media Hangout, Florence Hungbo, the theme of the 2022 edition of the media hangout is ‘Social X- Redefining the Narrative’.

She added that the choice of Gbenga Adeyinka and Derenle Edun as the event host and green carpet host respectively was borne out of the duo’s dexterity and creative prowess over time.

“After deliberations with our team, we eventually settled for the duo because of their pedigree in show business and the entertainment industry. They both will bring that glitz and glamour to the event. They are a perfect fit for what we are trying to project,” she stated.

Hungbo also listed Aproko Doctor, Efe Omorogbe, Iyabo Ojo, and Japhet Omojuwa amongst other celebrities and media personalities that will be at the event as panelists.

Bodex Social Media Hangout is an annual event designed for the celebration and recognition of principal actors within the digital media space. It is organised annually by Volt Media.

2023: Peter Obi Is The Only Hope For Better Nigeria, Says Obi Cubana