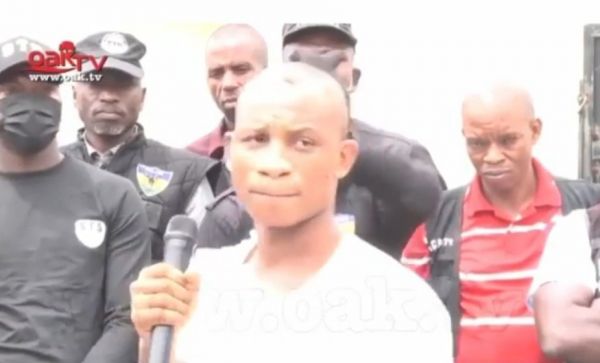 A 22-year-old man has been nabbed by the police in Port Harcourt after he duped and blackmailed several ladies on social media.

In a short clip making rounds on social media. the young man failed to mention his name but he described how he lured the ladies into his trap.

In his words: “I have been into online hookups on Instagram for several years. I meet females online and I tell them about hook-up, if they accept, they agree to come and see me in Port Harcourt from wherever they are.

They pay for their flight ticket and come down to Port Harcourt, they pay for a hotel room, after having sex, I leave them stranded in the hotel and run away, they will call me, I will tell them that I’m no more interested. I will now tell them to send money for me to delete their nude pictures, some pay 100k, some 50k, the girl that made them arrest me paid 300k

Recall Uduak Frank recently killed a lady, Umoren Iniubong who met him seeking for a job.

Uduak opened up on the circumstances that culminated in the death of the lady. Uduak Frank claimed she attacked him because she was removing her condom struggled to escape by attacking him and in return, he fought back and mistakenly killed her.

“I invited her for a job and I asked her whether she can work on a farm as a secretary. I told her that I wanted to sleep with her first. She agreed on a condition that I will use a condom which I also agreed to. She became furious when I started removing the condom, and she attacked me. I was bleeding so I needed to defend myself by hitting her which lead to her death,”

The Rapid Response Squad (RRS) of the Lagos Police Command has arrested three persons for dispossessing a pedestrian, Yusuph Ahmed, of N100,000 and other belongings.

Ridwan Imran (20), Lukman Abiodun (18) and Abdulahi Isa (18) had approached the victim and robbed him.

Led by Abiodun, they stopped the complainant at about 9pm on Wednesday in Isheri – Berger Garage. Other members of the gang are still at large.

A statement on RRS Facebook page said the attackers harassed and chased their target to Agege Stadium, smashed a bottle on his head and pushed him inside the drainage.

Apart from the cash, they stole three mobile phones and a wristwatch, all estimated at over N600,000.

Ahmed explained that one of his customers gave him the N100,000 to refurbish a Sienna car.

“I got to Isheri – Berger Garage where they (pointing to Ridwan Imran and Lukman Abiodun) ordered me to give them money for food.

“I pleaded with them that I had no money on me. Within a twinkle of an eye, they mobilized their colleagues, apparently lurking around.

“They were about six, I had to flee. They chased me from Isheri – Berger Garage to Agege stadium. They beat me ceaselessly and broke a bottle on my head,” he disclosed.

The citizen said God answered his prayers because he had given up hope of surviving the assault.

RRS Commander, CSP Olayinka Egbeyemi assured that all the perpetrators involved in the crime would be prosecuted.

Six suspected robbers have been arrested by operatives of the Lagos State Rapid Response Squad for allegedly dispossessing accident victims of their belongings at Otedola Bridge inward Ojodu-Berger, Lagos-Ibadan Expressway.

The six suspects who were descending the slope of the Otedola Bridge towards Olowopopo Road when they witnessed the accident, took the victims’ phones and other valuables while they (victims) tried to extricate themselves from the vehicle.

Among the suspects who were caught fighting over the property of the accident victims, including phones, money, and other valuables, are three ex-convicts.

The case has been transferred to the Command Special Squad for further investigation and prosecution. 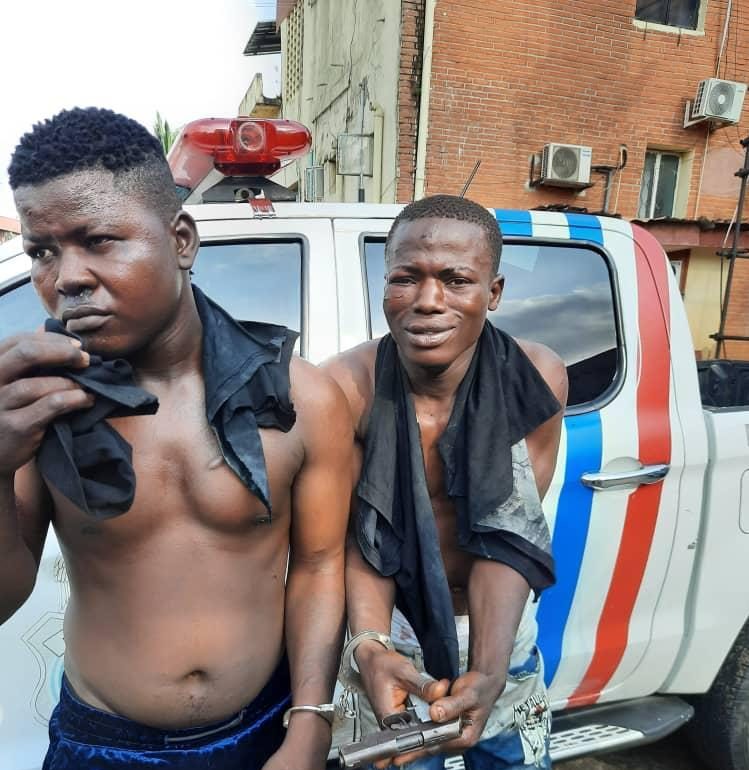 Two deadly robbery suspects, Lekan Abdulateef and Tajudeen Sanusi have been arrested by the police in Oshodi, Lagos with a pistol and charms.

Officials of the Rapid Response Squad (RRS) made the arrest at about 10.00pm on Monday, as the suspects in possession of a locally made pistol and charms.

A statement issued by the Police Public Relations Officer, PPRO, Lagos Police Command, Muyiwa Adejobi, said the suspects were out to perpetrate crimes across their target points when they were nabbed.

He said the vigilant RRS team on patrol around Oshodi metropolis, intercepted the robbers who were riding on a motorcycle suspiciously.

“The two (2) suspects namely Lekan Abdulateef, (M), aged 23 and Tajudeen Sanusi, (M), aged 24 are both indigenes of kwara State and residents of Ajegunle and Orile areas of Lagos respectively.

“One of the suspects Lekan Abdulateef, who was in possession of the pistol at the time of arrest, confessed to have bought the gun at the rate of hundred thousand naira (N100,000.00) from the vendor,” he said.

“He confessed further to have been using his pistol to rob motorists during traffic around Ojota to Maryland, 7up, China Town, Eko Bridge and Mile 2.

“The Commander RRS, CSP Olayinka Egbeyemi however confirmed that the two (2) suspects have been transferred to the Lagos State Police headquarters for discreet investigation as directed by the Commissioner of Police, Lagos State Command, CP Hakeem Odumosu,” he stated.