I’m Not Having An Affair With Kanye West – Jeffree Star 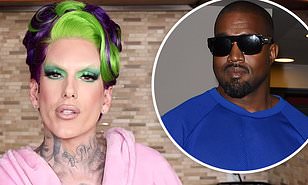 American YouTuber and fashion icon, Jeffree Star has finally put the rumours of having an affair with rapper Kanye West to rest.

The entrepreneur who initially first fuelled the rumours after it went viral, has now stated that he is not sleeping with Kanye West.

After the rumour went viral online, Jeffree Star allegedly fuelled the rumours after he said in a tweet that he was ready for Kanye West’s Sunday Service.

However, Jeffree has now cleared the air, said in a new tweet that he is not sleeping with Kanye West.

He tweeted: “I’m definitely NOT sleeping with Kanye, but the amount of rappers in my DM’s is wilddddd bitch. Time to make a hit song in bed.”

However, it is now thought that Kim was left ’embarrassed’ by speculation that he was romantically linked to her rapper husband.

The reality star, 40, and makeup artist, 35, used to support each other’s brands, with Jeffree once attending a launch for Kim’s products and her defending him after he was accused of being racist in 2017.

“I Thought I Would Be Happily Married By Now” – Actress, Ibinabo Fiberesima Laments