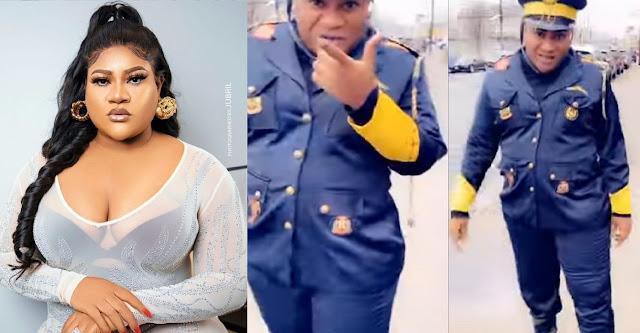 After images of her supposedly serving as security in the United States emerged, Nkechi Blessing Sunday who is currently based in America has broken silence.

Nkechi Blessing revealed that she had obtained a new position while uploading footage of herself wearing a security outfit.

The mother of one informed her followers via Instagram that she had been hired to work as a security guard in the United States of America.

Nkechi Blessing was making jokes and mistakes while walking around the streets of America while wearing her security uniform.

Nkechi Blessing even added thick garments to the area around her tummy to make it appear larger.

“Anybody wey talk too much go collect, I don get security work for America ooo This hustle must pay”.

“I Have Been Through A Lot Lately”, Actress Chacha Eke Finally Opens Up