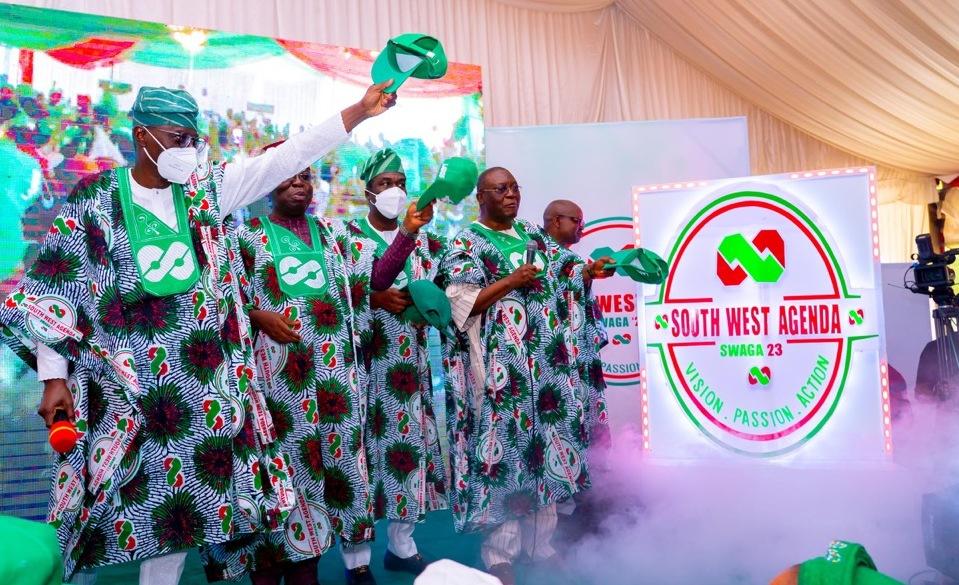 Nigerians have reacted to the official launch of the South West Agenda 2023 (SWAGA 23) in Lagos, saying that the movement, if serious about its ambition should rally round ensuring that the Vice President, Prof. Yemi Osinbajo or Minister for Works and Housing, Babatunde Fashola, emerges as the Presidential Candidate in the next elections.

Recall that on Thursday, a grand ceremony launching SWAGA 2023, a political machinery to push for the perceived presidential ambition of former Lagos governor and All Progressives Congress (APC) stalwart, Asiwaju Bola Ahmed Tinubu was launched at the 10 Degrees Event Centre in Lagos.

Although Tinubu, who is still recuperating from a knee surgery in London has yet to officially declare his interest to run for the highest office of the land, Thursday’s event confirmed that his protégés and his foot soldiers alike have the nod to proceed with laying the foundation for his eventual declaration.

Top guns from the APC led by the State Governor, Mr. Babajide Sanwo-Olu and his Deputy, Dr. Obafemi Hamzat as well as House of Assembly, House of Representatives, former lawmakers and party faithful graced the event to show their solidary towards ensuring that Tinubu emerges as the APC Presidential flag bearer for the 2023 election.

Shortly after the event, Governor Sanwo-Olu, who flagged off the event, took to his social media handle to elaborate on the event.

He wrote, “We attended the formal launch of the Southwest Agenda 2023 (SWAGA 23) in Ikeja. SWAGA 23 is a political movement being led by Senator Dayo Adeyeye and was formed based on the belief in Asiwaju Bola Ahmed Tinubu’s vision and political philosophy that prioritizes the development of human capital and economy.”

But the governor’s post sparked instant reaction from Nigerians most of whom disagreed with the ideals of the movement, saying the campaign should be supporting a younger candidate with the likes of either of Fashola or Osinbajo and not Tinubu.

See Some Reactions Below:

Thomasjoe99: “But wait o! Why can’t SWAGA rally round Osinbajo or Fashola. These are great guys with strong personalities.”

Olumaiye: “SWAGA should support Prof. Yemi Osinbajo if it means well for Nigeria. Osinbajo is a better candidate than Tinubu without intent to malign anyone.”

official_henryevans: “So out of all the available options in this country your lagosians decides to choose Tinubu? Like has this nation not seen enough already?? I pray this agenda dies on arrival.”

lawal_olugbenga: “We shall not vote for your BAT.”

valentine_ogene: “I don’t have to trust in any party, in as much as our vote doesn’t count because the likes of Tinubu and co have spoiled our system, I’ll still cast my vote to the rightful person, if APC brings out someone better than Tinubu, I’ll vote for the person, but I say a big NO to these agenda, do have a nice day.”

Danfo Driver Stabs LASTMA Official With Screwdriver On His Head