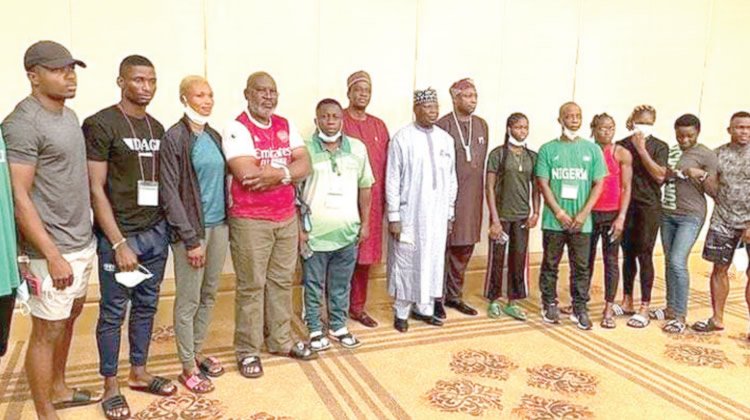 With the 2020 Tokyo Olympic Games set to officially kick-off on Friday, however, it was a show of shame as some members of the Nigerian contingents to the games, disorderly arrived Japan in Arsenal jerseys and other different attires.

This development, according to stakeholders is a big slap on the Sports Ministry under the leadership of Sports Minister, Sunday Dare, who has become a motivational speaker without addressing the needful that will help the team excel at the Games.

This is against the usual customized and uniform Team Nigeria kits, which is normally supplied by AFA Sports, the country’s official kits supplier.

The athletes and officials, who left the shores of the country on Tuesday, were not uniformly knitted as one of the officials was spotted wearing an Arsenal jersey, a day after Vice President Yemi Osinbajo unveiled AFA Sports as the official apparel of Team Nigeria to the games.

The scene has been greeted with discontent, as contingents from other countries – including South Africa – who arrived in Japan at the same time with Nigeria, wore their official kit.

The Shehu Gusau-led board of the Athletic Federation of Nigeria (AFN) and the Sports Ministry were said to have haggled over which company would kit the athletes, even after the federation had struck a deal with renowned sports brand, PUMA.

First Vice President of the AFN, Sunday Adeleye, however, warned that if Sports Minister Sunday Dare insisted on the PUMA kits not being used, it could scare foreign firms from entering into agreements with the country’s sports federations.

“If the minister insists that they shouldn’t wear the PUMA kits at the Olympics, he risks litigation from PUMA. Other companies who would love to enter into any agreement with federations in Nigeria will also be wary of falling into this kind of situation,” Adeleye said

According to reports, the Gusau-led board had confirmed delivery of the PUMA kits and plans to send them to the athletes and officials in Tokyo were in top gear. But, the ministry, through the Tonobok Okowa-led board of the AFN, has insisted on locally made kits.

“This kits issue is a big embarrassment to Nigeria, till now, we have not been able to finalise on our kits. Plans are in top gear to send kits down to Tokyo, but I can assure you that the athletes won’t use PUMA,” an official in the Okowa-led AFN told Punch on the condition of anonymity.

It would be recalled that the AFN and the Nigeria Basketball Federation had been enmeshed in kits controversy.