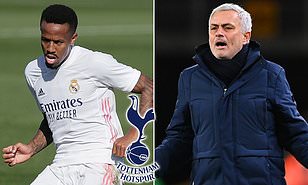 Mourinho is reportedly interested in bringing Militao to the club before the transfer window closes.

Militao, who has played nine times for Brazil, joined Real Madrid for £43million from Porto in March 2019, but he’s struggled to establish himself in the side.

The 22-year-old played 15 times in LaLiga last season as the side won the title, but his future at the club is uncertain after making just three appearances across all competitions this term.

AS says Real Madrid could be open to letting Militao go, but only for a similar amount to the £43m they originally spent on him.