Uko Akpan: The Eclipse Of An Iconic Bard 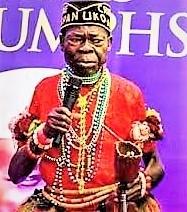 For the very proud people of old Abak Division in Akwa Ibom State the finality of death is a very painful reality. Otherwise, with the passage of Chief Uko Akpan, the iconic traditional musician and promoter of the cultural values of the Akwa Ibom people, they would have embarked on a fervent prayer and fasting regime to plead with God to return him immediately back to Abak.

Their position stems from the realisation that nature blesses respective communities with different kinds of talents which contribute in uplifting their respective status. As far as they are concerned, Chief Uko Akpan Ekpo Umanah was their own share of nature’s special blessing in this regard. They now have to live with that gnawing reality that their jewel is gone. That, probably, may be reason why his interment has been delayed for more than one year after he was certified dead.

Uko Akpan was an embodiment of African traditional music, the version loaded with philosophical anecdotes. The mere mention of Uko Akpan in both Akwa Ibom and Cross River States would pop a picture of a human theatre that spews sonorous musical ballads. It is a common saying in these parts that good music can be perceived at the start of a whistling; that a palm tree capable of good foliage shows forth at a tender age. It was so with Uko Akpan. He started singing at age 15, a talent he got from his father. He used music to uplift the name and status of Abak at the beginning, and subsequently the old Cross River and Akwa Ibom States.

From childhood, Uko Akpan used his native Annang language and his familiarity with the culture of the people to compose songs. His songs came in melodious frames that uplifted and celebrated the norms and values of the people. It also built a platform for the preservation of those values for the benefit of future generations. He was a fountain of trado-cultural communication. No major event of state or national importance in Akwa Ibom was ever complete without his performance. He was a pride that was showcased at every available opportunity.

His commitment to this endeavour brought him laurels. He had the gift of song writing and used his songs to extol the cultural values of the people, to relay history, sing praises, chastise bad behaviour and salute ingenuity. He used it to spread love, peace and togetherness between families, between communities and across Nigeria. He wrote his songs with uncanny intellect and delivered them with exceptional candour. He was fearless. His songs generate sweet tones; and are danceable. He was appreciated by both young and old.

Uko Akpan was a man with musical sagacity. He did not only sing, he was one of the greatest dancers. He was a multi-instrumentalist too. He performed until his time on earth was up. His athletic psyche gyrates easily to the pulsating music from frenetic musicians who beat the drums, metals and associated instruments with all the professional vigour they could muster. Apart from the microphone, loudspeaker and whistle, all other instruments employed by Uko Akpan were local – made from metal, wood, bamboo and animal skin. His attire was simple, but not complete without raffia strands and beads.

His legs had spring in them. The ankles where like flexible blades. His waist was only attached to the body when not in action. At the sound of the drums, the waist detaches from the body and swirls as if driven by an electric motor. It cuts a picture of a propeller gone haywire. How he did, only he could tell; but the waist and the frenzied drumbeats were always in synchrony.

He was an icon in trado-cultural communication. He used proverbs to illustrate his mindset; he employed common phrases to drive home his points. He even used the scriptures to admonish and warn. He was an encyclopaedia of native rhetoric. He was a cultural philosopher. He delivered his messages in such a sonorous voice that would make the lame curse the day he lost his limbs.

Probably unknown to him, he was an expert in the trado-indigenous art of communicating with messages. The rattler which he always wielded in both hands would truncate his speech renditions at appropriate moments. At a point in his career, the rattler became a spontaneous part of the act, controlling his hands and swinging interventions at appropriate intersections to allow him deliver desired messages in that sonorous voice that was made for him only. No other person I have ever come across had Uko Akpan’s voice, not when he is singing. You can never mistake his voice. It gave his songs a distinctive identity. The voice rings and the drums and other instruments deliver the message simultaneously in a compulsive danceable format.

Dancing to Uko Akpan’s beats, no matter how brief, gives an aerobic sensation; it is made for the physically fit. It is an exercise that can massage the entire body in one fell swoop. Only those who can balance both legs on their toes can successfully do the dance associated with his kind of music. It could be the reason he never wore shoes while on duty. Even the infirm cannot sit still because the message and instruments are often very compelling. Head swinging and hand flaring would be the least movement when the beat is on.
Uko Akpan was an enigma, but he never appropriated all the credits for any performance. He always stopped to acknowledge one of the lead performers in the ensemble, For instance in Isua Kaa o, he acknowledged the awesome performance of Monday Okokon the ace drummer, hailing him and acknowledging his contribution.

He was a peace ambassador. There is hardly any of his songs that does not have yâƙ ĭşơŋ ābă emem emem – let the land be peaceful. Even when the beats during his rendition run riot, he will plead that yâƙ ǖĵō ibit äde emem emem; (let the drumbeats go easy); or with the songs: yâƙ ǖĵō ıķŵő ämi äde emem emem (let my rendition come in peaceful tones). When admonishing, he would still add yâƙ ĭşơŋ ābă emem emem o! He always counselled that anything that was capable of bringing strife should be avoided; and that the world will be a better place if the inhabitants live in peace with one another.

He always extolled hard work and good principles and often pointed out that successful ventures follow some level of slavery. He pointed to himself who became a slave to music – Nse awo ananam id’ibogho ufen! Uko akpan akwo ikwo akapa ifun ano ikwo – Uko Akpan has been singing and has become a slave to music. Just as well, he always counselled against self-deceit and hypocrisy. He did that in a song he titled Isua Kaa o!
The performance was reminiscent of a routine ritual back in the day. At midnight on December 31 in the local communities, people rush into the streets, letting out loud yells of isua ka o, chasing away the receding year and asking it to take along all our infirmities and challenges. We were made to believe that the phenomenon would be racing past, carrying with it the misfortunes, ills, and woes of the dying year. We would cower in fear as older persons in the community, particularly women, pour into the streets, beating pots and pans to see off the damned year.

The dying year was always seen as a cursed moment in their lives; but Uko Akpan said they were living a lie if they were getting into the New Year with all the bad habits they lived with in the “cursed” year. The year just changed, but has not gone anywhere because human beings have not changed their habits. Ämäbò isuă ķää ò, äķéré ãbó ķē isuâ âķâ mķpò. Isuă ikagha ebiēt bēne kiēt umu duoŋóke idiok edu afo!

Uko Akpan, who was born into the Nto Ekpo Umanah family of Ikot Obong, Afaha Obong in Abak Local Government Area in 1927, uplifted the name of Abak, in particular, in so many ways; but he became a household name across what used to be South Eastern State. He was also on the national scene. He received several awards of excellence following his impressive outings.

Although Uko Akpan never went to any formal school, he used his God-given talent to achieve great feats such that books and academic thesis are written on him, while his works are being studied in institutions of higher learning. It was in recognition of his iconic achievements that the University of Uyo in 2015 conferred on him a Doctor of Music Honoris Causa. When Akwa Ibom State celebrated its 30th anniversary in 2017, he was recognised as an Iconic Achiever in Entertainment.

In 1977, he was one of the prominent artistes selected to participate in the African Festival of Arts and Culture (FESTAC 77) in Lagos. He went and excelled. In 1983, he won and received an award at the Zonal Cultural Competition organised by Cross River State Ministry of Youth Sports and Culture. In 1983, he received a certificate of honour from the National Association of Annang Students (NAAS) in appreciation of his work in promoting Annang folklore and advancement of the culture of the people. The National Association of Akwa Ibom State Students (NAAKIS) also honoured him with an Award for Excellence. Ikot Ekpene Chamber of Commerce, Industry, Mines and Agriculture recognised him for uplifting the cultural standards of the Akwa Ibom people and Nigeria.

In 1987, Abak Traditional Rulers Council conferred on him the chieftaincy tile of Èķêrê Abak. In 1990, the Annang nation upgraded the title to Èķêrê Annang. The Akwa Ibom Traditional Rulers Council thought that he was too iconic to be seen as an ethnic champion, and so elevated him to Èķêrê Akwa Ibom. The title Èķêrê is derived from a special metal gong with peculiar sonorous sound. So, the title means the sonorous voice of Akwa Ibom. He was variously described as Ubők Udom Ajiârâ Ekpe, Mkpo ide Abak, Mkpâ Uto Annang and Èķêrê Akwa Ibom.

In the year 2000, Mboho Mkparawa Ibibio, the umbrella socio-cultural association of Ibibio youths, gave him a recognition award while Ati Annang, the umbrella body of Annang youths inducted him into the Annang Hall of fame. They also gave him the Heritage Prize award. Annang is the second largest ethnic nationality in Akwa Ibom State.