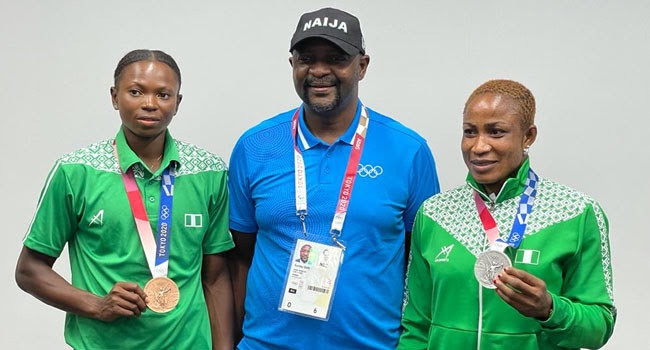 …Finishing 74th At Tokyo Olympic Games Is An Achievement-Dare

The just concluded 2020 Tokyo Olympic Games may have exposed some of the loopholes the Sports Ministry could have worked on prior to the showpiece.

By and large, the overall outing of Team Nigeria has left many stakeholders in the industry lamenting another poor outing at the prestigious event owing to the perceived failure of those placed in charge of managing the affairs of sports in Nigeria.

Before the games commenced, there was little confidence that the country will finally win medals owing to the team’s shoddy preparation.

Fears were confirmed when Team Nigeria contingents first appeared in different attires despite the announcement of AFA Sports as the country’s official kits supplier.

However, the unrest within the Athletics Federation of Nigeria (AFN) does not show any sign of letting up.

The latest is the termination of the kitting contract in place with sportswear giant, PUMA. The terminated contract for a three-year duration was signed in Qatar in July 2019 and is worth about N1 billion [$2.7million].

Sunday Adeleye, a former Technical Director of the Athletics Federation of Nigeria (AFN) said he had never seen such a thing before since he became an adult and followed Nigeria’s participation at the Olympics.

“An athlete going to the Olympics should be well-motivated, and kits are part of it; not when people appear in bathroom slippers and apparel in different colours,” he said.

The embarrassing drama has also resulted in the termination by Puma of $2.76 million contract it had with the AFN.

“As a direct consequence of the recent developments, particularly at the Tokyo Olympic Games 2020 and pursuant to clauses 9.2 and 7.3 of the Agreement, we hereby terminate the Agreement with immediate effect.

“PUMA especially declares to be discharged from any or all obligations towards all stakeholders involved and reserves all rights against these entities and individuals,” PUMA stated this in a statement signed by its Director, Manuel Edlheimb.

More importantly, Team Nigerian known for their strength in Athletics, failed to pick a single medal in the event at the ongoing Games. Recall that Blessing Okagbare, one of Nigeria’s medal hopeful was disqualified by the Athletics Integrity Unit (AIU) after testing positive for human growth hormone. That aside the 10 Nigerian athletes who were suspended for the same reasons.

Without doubt the Nigeria athletes would have done better at the Games if the Sports Ministry had an experience Physicians and Psychologists, who understand the job was attached with the team. That doesn’t mean that that would have motivated them mentally and physically.

Blessing Oborodudu made history as the first Nigerian wrestler to win an Olympic medal courtesy of the silver medal she won in the women’s 68kg freestyle. While Long jumper, Ese Brume won Nigeria’s first medal at the Games with a bronze.

Her medal is the first won in track and field since 2008 at the Beijing Olympics where Blessing Okagbare and the women’s 4x100m relay team won a silver medal each.

However, former Minister of Sports, Solomon Dalung has said that the Sports Ministry has brought shame to the country at the ongoing Tokyo Olympics.

Besides, poor management and lack of accountability in the country’s Olympic committee have compelled many shining stars of Nigeria to switch sides and compete for other nations.

Dalung said Sunday Dare who replaced him as the sports minister in 2019, lacks the “patriotic political will to consolidate on the gains on the ground” hence the reason for Team Nigeria’s numerous disappointments in Tokyo.

“I think the dissolution of boards. It is a lack of patriotic political will to consolidate on the gains on the ground.

“When I was the minister, I continued from where my predecessor ended. When we get to the field, we built on previous successes and Nigeria did very well.

“Dissolving federations three months to Olympics is an indication that we are not prepared for Olympics. No general dissolves his troops on the eve of an attack and expect to win a war. The dissolved boards have trained and catered for the he athletes for more than two years. Crises are part of human existence; the management is what determines the quality of leadership. I inherited many crises, but I resolved them.

“Leadership is about taking responsibilities. When things go wrong, somebody has to be responsible. The entire drama of shame is avoidable. This is a shame that the country has found itself.”

It is so sad that Nigeria finished Tokyo Olympic Games with just two medals despite the country’s population and huge talents that was never tapped by the current Sports Ministry under the leadership of Sunday Dare.

Meanwhile, Nigeria’s sports minister, Sunday Dare, says citizens of the country should be proud of the country for ranking 74th in the medals table for the just-concluded Tokyo 2020 Olympics.

The minister, who described Nigeria’s athletes as ‘inspiring’, claimed that finishing 74th on the medals table is the country’s best performance in Olympics in 13 years.

“Overall, we should be proud of Team Nigeria and the effort they made. The bottom line is that these games should always be about the athletes and the spirit of friendly competition and excellence the Olympics are meant to engender.

“Team Nigeria placed 74th position on the final Olympic medal table among 205 participating countries, despite our small contingent to the games. We were 8th among 52 African countries that participated. Team Nigeria excelled in many areas that engender hope for greater success in the future.

It is also yet to be seen if decisive actions will be taken on those responsible for Nigeria’s dismal outing in Tokyo.